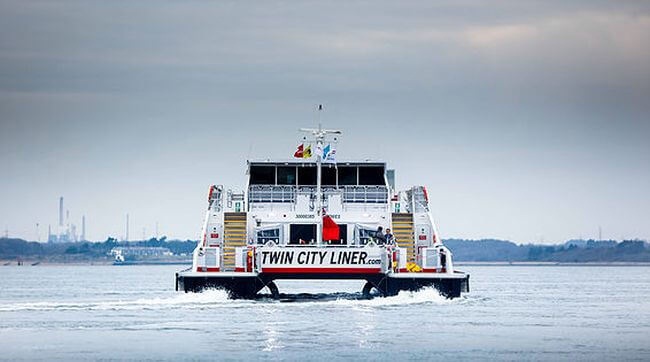 The passenger river catamaran was handed over to its new owners in an event hosted by Peter Morton, CEO of Wight Shipyard. In attendance was His Excellency Michael Zimmermann Ambassador of the Republic of Austria to the United Kingdom of Great Britain and Northern Ireland and Dr. Gerd Krämer from TCL. Isle of Wight representatives included the Lord Lieutenant Major General Sir Martin White KVO CB and Dave Stewart Leader of the Council.

The 39-meter vessel is excellent news for the Isle of Wight shipyard and follows an exceedingly productive 2018. With other successful deliveries to Red Funnel for a second 41-meter high-speed passenger ferry, followed swiftly after with Scotland’s Jacobite Cruises 21-meter day cruise catamaran for Loch Ness.

“Our reputation for building the finest high-speed ferries in the world is spreading, making the prospects for Wight Shipyard look healthy. Our strong order book is a big vote of confidence for our Isle of Wight shipwrights, the marine industry and indeed the UK economy,” Peter Morton says.

You may also be interested: Types Of Marine Navigation Instrument, Tools And Equipment Used Onboard Ships

The new vessel is a low wash round bilge catamaran designed by Incat Crowther. The Danube presents a challenging operating environment with currents up to 8 knots, water depths in the main navigation channel as low as 100 cm. The hull form is designed to cope with water conditions reasonably expected on the river, being able to resist floating timber and debris. As a restricted waterway, it is imperative that wave wash is minimized.

Passengers board the new craft via midship doors port and starboard and enter a bright and airy main cabin capable of seating up to 186 passengers. A kiosk providing a range of snacks and refreshments is provided aft on the starboard side. On the port side, toilets are provided one of which is for disabled customers.

Above, the upper deck is accessed from a center staircase in the main cabin as well as two staircases aft on the open deck. External seating will be provided for 29 passengers while aft of the elevated wheelhouse interior seating is available for 35 passengers. Being a commuter ferry as well as a cruise vessel, there will be space for 12 bikes on the aft deck.

In the hulls, the engine rooms are designed to provide crews with maximum access with all machinery arranged in the same space. The engine rooms, as well as the jet rooms, are designed so the engines, generators and water jets can be removed without slipping the vessel or damaging the superstructure or hull.

The vessel is powered by four Scania DI16 072M main engines, each producing 809 kW at 2300 rpm. Capable of reaching a maximum speed of 38 knots, the vessel will sail on the Danube at a service speed of 32.4 knots at modest MCR.

“With the new vessel from Wight Shipyard Co we want to extend the success story of Twin City Liner for the next 25 years. Customer experience is key to our business and with our new catamaran, we are promising our passengers an even more exciting and enjoyable time on the Danube River.

“With this new vessel, we will cater for projected traffic growth, achieve much better operating economies of scale, greatly reduce our environmental footprint and at the same time be able to offer a comfortable and exciting high-speed transit along this beautiful waterway,” Mr Krämer says.

The new vessel has been delivered in good time for the 2019 summer season, starting at the end of March.