What is a Bill of Lading (B/L or BoL) in Shipping?

What Is A Bill of Lading?

Bill of lading is a document issued by a carrier to a shipper, confirming the particular good that has been received on board as cargo transporting it to a destination and delivering it to the consignee.

The word ‘lading’ means ‘loading’. It refers to the loading of cargo aboard a ship. Simply put, the Bill of Lading or BoL or B/L is a receipt.

The document acknowledges that the carrier (or the agent) has received the goods (cargo or shipment). Though the British term refers strictly to shipping, the American definition is not as strict and can be applied to the transportation of any type of good.

To ship any cargo, a BoL is required and acts as a receipt and a contract. A completed BOL legally shows that the carrier (agent) has received the shipment as described and is now contractually bound to deliver the goods in good condition to the consignee. In a sense, it is a service level agreement between the freight company and the client. In case of a dispute, Bill of Lading becomes a very vital piece of documentary evidence. For this reason, all parties have to ensure that all details are filled accurately with no scope of error.

It is a standard-form document that is transferable by endorsement or by legal transfer of possession.

Functions Of Bill Of Lading

The information in a Bill of Lading (B/L) documents the actions of the carrier throughout the shipment. Information like where the shipment is going, the piece count, how it has been billed, and also how the freight has to be handled on the dock and trailers. It could be on a prepaid or collect basis.

A BoL serves these purposes:

Different Types of Bill of Lading

There are many types of Bill of Lading which can be divided into many 4 main categories.

A) Based on Carrier

It is issued by the shipping carrier companies.

It is issued and signed by the freight forwarder.

It is also issued by the carrier or its agent in exchange for the first set of BoL. It cannot be issued until the first BoL is inactive.

B) Based on Payment

This is used when the money for the goods has been paid in advance and so a carrier needs to deliver the correct merchandise to the right party.

It is a bill stating that delivery shall be made to the party holding the bill. The creation of such a bill may be explicit or if an order bill fails to nominate the consignee then it can be considered as one whether in its original form or through an endorsement in blank. A bearer bill can be negotiated by physical delivery.

When shipping merchandise prior to payment, a carrier is required to deliver the merchandise to the importer. Under such a situation order bill lading is used and at the endorsement of the exporter, the carrier may transfer title to the importer. These order bills of lading can be traded as a security or they may be used as collateral against pledged loans.

Here the importer does not pay the bank until the maturity of the draft under the relative credit which works under the term ‘Import Documentary Credit’. The bank undertakes to remit the payment to the seller on behalf of the buyer. To receive the payment, the seller must present the documents specified in the terms of the documentary credit to its bank during the validity of the documentary credit. This direct liability is called the Surrender Bill of Lading. (SBL). 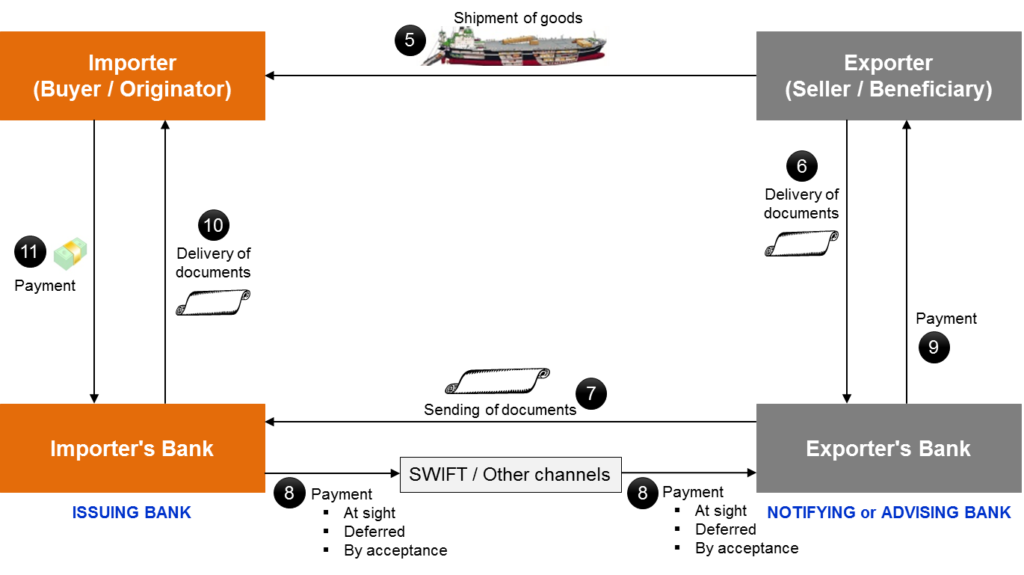 C) Based on Shipment Condition

This is one which states that the cargo has been loaded on board the ship in apparent good order and condition.

It is also known as a soiled bill of lading. Such a bill of lading bears a clause or notation suggesting that the goods were received by the carrier in poor or damaged condition.

D) Based on Mode of Transportation

This allows the carrier to transport the consignment by road, air, or rail across the land.

It is used when cargo has to be sent overseas across seas.

This B/L enables the carrier to carry the cargo across different distribution centers. It can need an inland or ocean BoL

It is used in the case where more than one mode of transportation will be used.

Disadvantages of Paper Bill of Lading

Though paper BoL serves a very important role in the shipping industry, it comes with some inherent risks associated with paper system costs, authenticity, and delay. Let’s explore each aspect closely.

1)  Costs: The cost of paper used for B/L can range anywhere from 5-10% of the total value of the goods carried each year1 or 15% of the physical transportation costs2.

2) Authenticity: A BoL can be easily forged due to the sheer number of parties involved and the complex shipping process. This can lead to theft or other illegal things.

3) Delay: BoL is sent using a mail system which is slow compared to the modern transportation system used for cargo delivery. The carrier can only deliver to the cargo when the consignee produces the original BoL. In case of the dealy ion receiving the BoL by the consignee, the carrier has to deliver the goods in return for a letter of indemnity.  This adds extra administrative load on the carrier and the liability still hangs on it.

Electronic BoL presents an ideal solution to the disadvantages of a paper BoL but has met some resistance due to various reasons. But slowly, more and more companies and organizations are adopting electronic BoL. In 2015, BIMCO, the world’s largest international shipping association, added an electronic bill of lading clause to its NYPE 2015 time charter form. The International Group of P&I Clubs also gave approval for three electronic trading systems: Bolero, e-title, and essDOCS.

Advantages of Electronic Bill of Lading

The electronic bill of lading or e-bill has the potential to addresses many of the drawbacks of the paper BoL system.

1) Electronic BoL is fast. In fact, electronic BoL can be sent instantly via the internet to any destination which lowers the administrative costs and delays that plague the paper B/L. In the case of multiple transfers of ownership during the transport, an electronic bill of lading can be even more effective

2) In an electronic bill of lading the modifications or corrections can be made very efficiently and cost-effectively as compared to the traditional BoL.

3) Electronic BoL provides a higher level of security which minimizes any chances of forgery. The introduction of blockchain has made this system even more secure and unpenetrable by hackers.

Disadvantages of Electronic Bill of Lading

1) A paper Bill of Lading is a physical document of title which can be negotiated and transferred as the possession of the boL is proof of title to the cargo. This is not the case so for Electronic bill legally speaking.

2) Electronic BoL needs to be accepted and adopted by all the parties involved. Therefore, it has taken time to take off.

Why Is Bill of Lading Important?

Legally, a seller cannot sell anything that is not solely entitled to him. So if the goods he is trying to sell turn out to be encumbered, maybe due to mortgage or charge or is stolen property, the bill of lading will prevent him from being granted the full title of the holder.

The Bill of lading can also be used as evidence of a contract of carriage between a carrier and a shipper. Basically, when a bill of lading is used as a cargo receipt, it is issued by the carrier when the goods have been loaded onto the vessel.

So far the maritime industry has been reliant on paper. Despite the inefficiency that comes associated with paper bills of lading the community has shied away from electronic bill of lading (eB/L) which is the legal functional equivalent of a paper bill of lading, due to their traditional nature. However, it has been proposed that Blockchain technology3 is the answer to the necessity for a speedy, hassle-free, and reliable trade transaction.