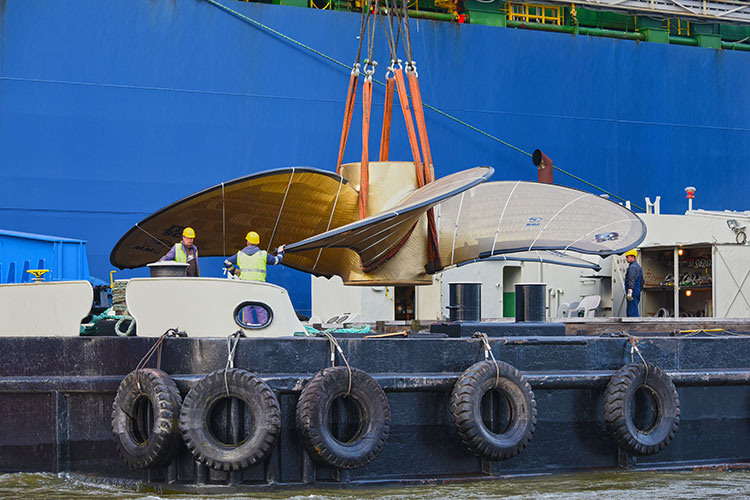 On Sunday, 16 September, Hamburger Hafen und Logistik AG (HHLA) loaded the biggest ship propeller in the world onto a vessel. The “HHLA IV” floating crane brought the gigantic 110-tonne object to the port of Waltershof, where it was hoisted onto the “Hyundai Supreme” container ship. 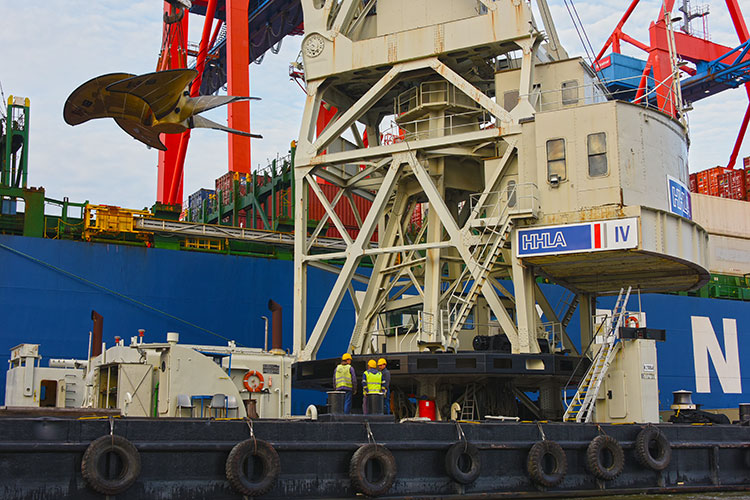 It was the most powerful ship propeller to have ever been lifted by the hook of a HHLA floating crane. Although HHLA regularly loads the specialised products of Mecklenburger Metallguss GmbH (MMG) onto ships in Hamburg, the latest propeller, with a weight of 110 tonnes and a diameter of 10.50 metres, surpassed anything that had ever been seen at the port before.

MMG is a leading manufacturer of ship propellers. Around 100 MMG propellers are loaded onto ships at the Port of Hamburg alone every year before making their way to shipyards all over the world. Since they are usually transported by container ships, and container gantry cranes are generally unable to lift such large heavy loads, the “HHLA III” or “HHLA IV” floating cranes are nearly always involved in loading operations at the Port of Hamburg. 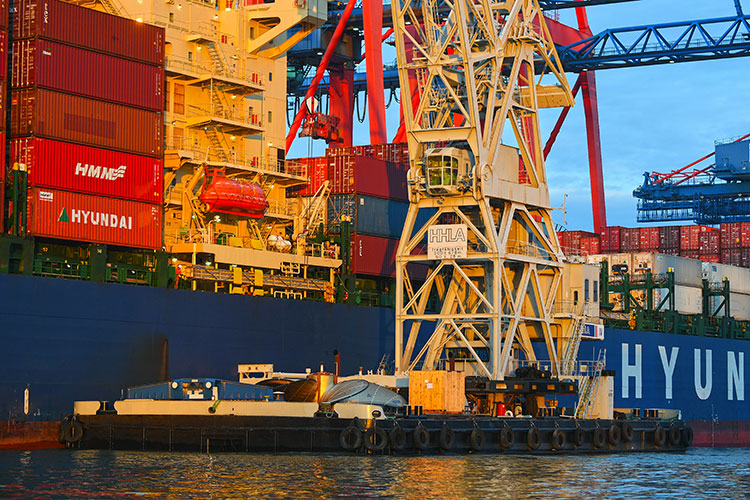 After being carefully transported by road from the production facility in Waren an der Müritz in Mecklenburg-Western Pomerania to Hamburg, the gigantic new propeller was temporarily stored at Hachmannkai quay close to the HHLA Container Terminal Tollerort until it was ready for loading. On Sunday morning, the “HHLA IV” floating crane, which can lift up to 200 tonnes, moved the world’s biggest propeller onto its transport platform and brought it to the berth of the “Hyundai Supreme” at the port of Waltershof. The jib of the floating crane raised the propeller from the transport platform and carefully lifted it over the towering side of the 300-metre-long container vessel. It was a delicate operation that involved lowering the heavy load centimetre by centimetre into the hold of the ship.

The “Hyundai Supreme”, a 5,000-TEU container ship, departed from the Port of Hamburg again on Sunday, 16 September, at 6:30 p.m. and headed for the Far East. The 110-tonne propeller on board is destined for the port of Busan in South Korea. From there, it will be transported on to the Daewoo Shipbuilding & Marine Engineering shipyard, where the first of eleven new container ships are currently being built for the shipping company MSC. With a capacity of 23,000 TEU, the newbuilds will be the biggest container ships in the world.